The spread of the Women’s Temperance Crusade

How is collective action shaped by networked information technologies? 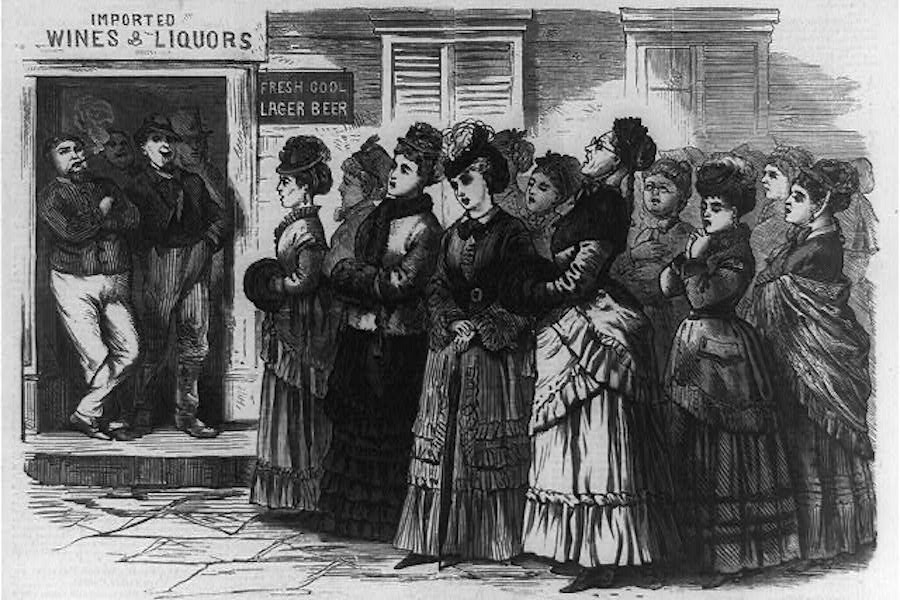 The ladies of Logan sing hymns in front of barrooms in aid of the temperance movement.

Communication technology has always played a key role in the way that grassroots movements have organized and spread their messages. Two hundred years ago, newspapers were essential to revolutionary efforts; today, social media has been at the center of recent protests.

But little is understood about how different types of communication technologies impact collective action.

In a paper in the American Economic Review, authors Camilo García-Jimeno, Angel Iglesias, and Pinar Yildirim looked at a period of rapid change in the United States to better understand the role that information technology plays in collective action and political mobilization. They mapped how railroads and telegraphs affected a wave of anti-liquor protest activity from 1873 to 1874.

Everyone is very interested in how social media matters for political attitudes and political preferences and collective action. It's probably not enough to just think about the internet; it actually depends a lot on other sources of information or other kinds of information technologies. I think that that makes the picture much more complex, but also much more interesting.

Anti-liquor sentiment had been building since the early 1800s in the United States, and the first Women’s Temperance Crusade event took place on December 14, 1873 in Fredonia, New York. Local organizers led a group of women in prayers, songs, and Bible readings to convince the owners of bars, drug stores, and hotels to either close or sign pledges to stop selling alcohol.

News of the event spread, inspiring similar protests and saloon sit-ins across the country, especially in the Midwest.

“Nowadays, social media is almost real time, and it reaches everyone, so you wouldn't be too surprised to find everything happening very fast. But in the 1870s, there was a lot of friction going on in terms of how people and news were moving,” García-Jimeno told the AEA in an interview. “But in just a matter of days or weeks, we saw responses [from protesters] between New York and Chicago. It was pretty striking.”

In an era when women in the United States were still disenfranchised in all states except for Wyoming and Utah, informal, word-of-mouth organizing was essential to women’s ability to exercise political power. Railroad travel allowed the leaders in the movement to quickly get from place to place to rally people around the temperance cause or consult with local leaders.

The researchers analyzed towns connected to the US railroad network, and by comparing locations with functioning railroad lines to those lines disrupted by train accidents, they were able to isolate the causal effect of information traveling along railroads on protest activity.

They found that during the phase of the fastest spread of the movement, one additional crusade event among neighboring towns linked by rail led to a sixfold increase in the probability of a town holding a crusade event in the following ten days.

While the new railroads were a boon to the organizers, the effect of telegraphs was even greater. Telegraphs led to nearly real-time news reports and allowed temperance leaders to coordinate their messages and actions, generating and sustaining enthusiasm for the cause.

Crucially, the telegraph did not simply replace the railroad in facilitating protest diffusion. Despite being a newer and more efficient technology, it played a strong complementary role. The combination of a direct rail link and telegraph access increased the likelihood of collective action by 10 percentage points relative to having only one or the other.

The results show that information moving along rail and telegraph lines was essential for mediating the social interactions that allowed the women’s movement to spread from town to town across America.

The researchers’ work sheds light on the way that information technologies interacted during the Women’s Temperance Crusade. It also provides a richer picture of the complex effect new technologies can have.

“Everyone is very interested in how social media matters for political attitudes and political preferences and collective action,” García-Jimeno said. “It's probably not enough to just think about the internet; it actually depends a lot on other sources of information or other kinds of information technologies. I think that that makes the picture much more complex, but also much more interesting.”

“Information Networks and Collective Action: Evidence from the Women's Temperance Crusade” appears in the January 2022 issue of the American Economic Review.

Can a simple message to come home convince insurgents to leave the battlefield?

Demagoguery on the airwaves