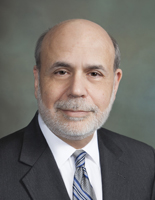 Dr. Ben S. Bernanke is a Distinguished Fellow in residence with the Economic Studies Program at the Brookings Institution. From February 2006 through January 2014, he was Chairman of the Board of Governors of the Federal Reserve System, having been appointed to that position by both Presidents Bush and Obama.

Before his appointment as chairman, Dr. Bernanke was chairman of the President's Council of Economic Advisers, from June 2005 to January 2006. He was a member of the Board of Governors of the Federal Reserve System from 2002 to 2005.

Dr. Bernanke has published many articles on a wide variety of economic issues, including monetary policy, macroeconomics, and economic history, and he is the author of several scholarly books and two textbooks. He has held a Guggenheim Fellowship and a Sloan Fellowship, and he is a Fellow of the Econometric Society and of the American Academy of Arts and Sciences. Dr. Bernanke served as the director of the Monetary Economics Program of the National Bureau of Economic Research (NBER) and as a member of the NBER's Business Cycle Dating Committee. In July 2001, he was appointed editor of the American Economic Review, the profession’s leading research journal. Dr. Bernanke's work with civic and professional groups includes having served two terms as a member of the Montgomery Township (N.J.) Board of Education. He is currently serving as a member of the New Jersey Governor’s commission on the re-opening of that state.

Since leaving the Federal Reserve, Dr. Bernanke has continued to author articles and books, including his New York Times best-selling book, The Courage to Act: A Memoir of a Crisis and its Aftermath, (October 2015). In 2019 he served as president of the American Economic Association. He is a Senior Adviser to the asset management companies PIMCO and Citadel.

(from the Brookings Institute: https://www.brookings.edu/experts/ben-s-bernanke/)