The AEA Distinguished Education Award acknowledges excellence in economic education at a national level. Recipients are able to demonstrate a sustained and impactful contribution to several areas of economic education. These areas include teaching, the development of curriculum and pedagogy, scholarship of teaching and learning (SoTL) of economics, mentoring of students and young faculty, and service at the institution, regional, and state level. 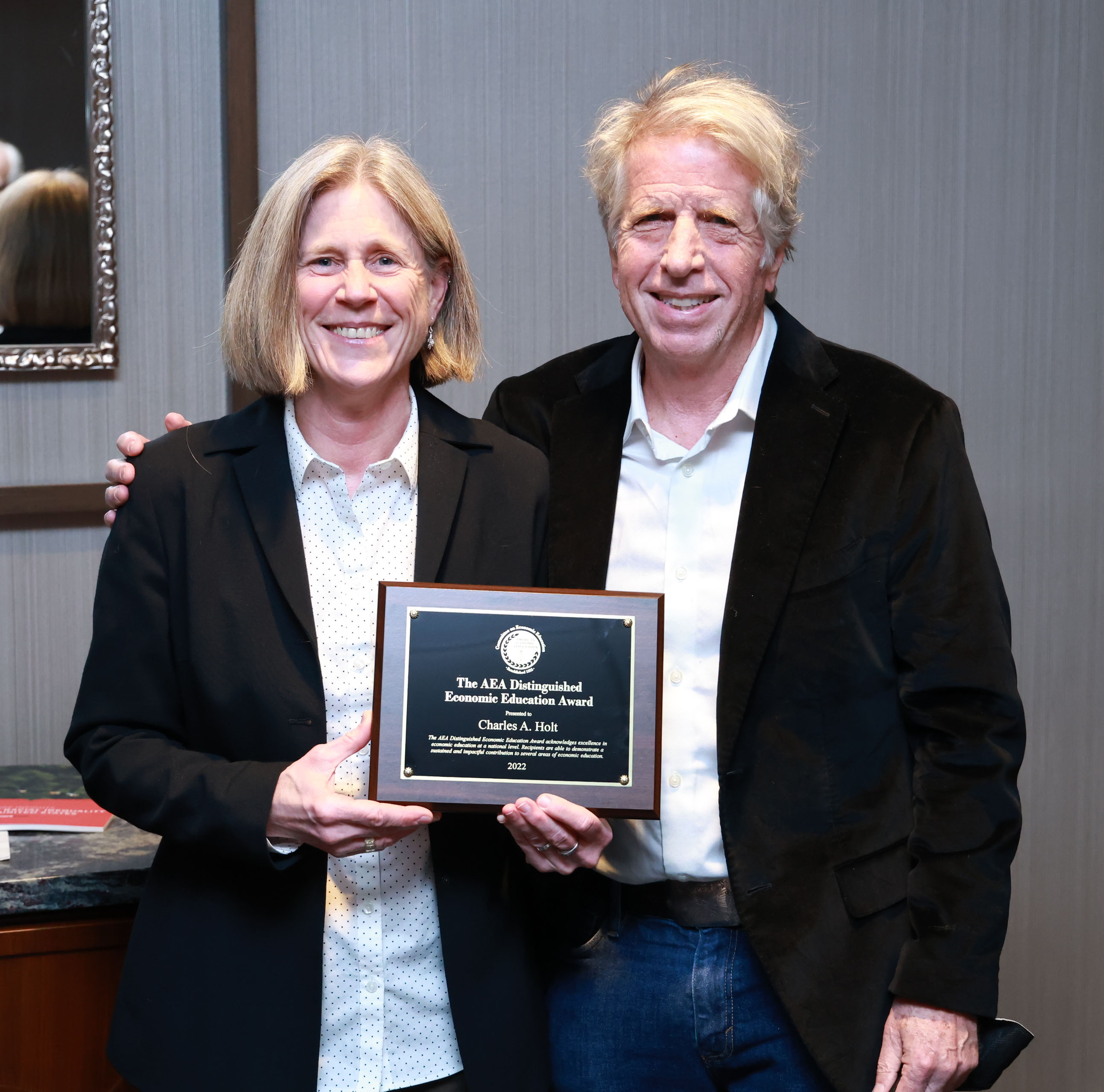 Charles (Charlie) Holt, University of Virginia (UVA), is the inaugural recipient of the AEA Distinguished Economic Education Award. Charlie has served on the UVA faculty since 1989 and is currently the A. Willis Robertson Professor of Political Economy in the Batten School of Leadership and Public Policy.

Charlie is a renowned experimental economist who has made significant contributions to economic education through the development of experiments for the economics classroom. He tirelessly promotes the use of experiments and provides resources that enable other economic educators to adopt this pedagogical technique. Charlie’s support comes in the form of published articles on experiments for face-to-face classroom use as well as the creation and maintenance of VeconLab, an online interface for running experiments. The computerized format of VeconLab makes adoption of experiments possible for instructors of large enrollment and/or remote classes. VeconLab is freely available, creating accessibility and opportunity for thousands of economic educators around the world.

In addition to Charlie’s contributions to the Scholarship of Teaching and Learning, he has actively engaged others in this work. As part of an NSF funded project, Charlie organized and led annual workshops where economics faculty were both shown good examples of classroom experiments for teaching and organized into groups to create new classroom experiments, some of which were ultimately published in the Journal of Economic Education.

Charlie’s mentoring of students and faculty stretches far beyond these NSF funded workshops. Charlie has served as a mentor to countless undergraduate and graduate students and faculty over the years. Students and colleagues alike speak of Charlie’s investment in them – including inviting them to work on projects, funding their experiments, and aiding in networking. As evidence of his commitment to and excellence in teaching and mentoring, Charlie was selected as the 2008 recipient of the Southern Economic Association’s Elzinga Teaching Award and the 2014 recipient of UVA’s Excellence in Faculty Mentoring Award. Further, Charlie’s commitment to economic education is also demonstrated by his service on the AEA’s Committee on Economic Education (2000-2004) and active membership in the Society of Economic Educators.

The fruit of Charlie’s career perfectly demonstrates the synergies that arise when an economist’s research passion is also carefully and creatively applied to teaching endeavors.  His lifelong efforts enrich the experience of thousands of students and improve the teaching experience for hundreds of economic educators. He has nurtured a pedagogical technique and created a platform that allows us to demonstrate important economic outcomes day after day. Through a career marked with diligence, example, and generosity, Charlie has become an educator of educators, enhancing economic education in classrooms around the world.

A nominee must be a current member of the AEA. This award is not designed to recognize a single contribution but the accumulated impact on economic education. As a result, recipients must be able to document at least 15 years of sustained contribution to the field. The recipient need not be employed at an academic institution, but must be able to document their own teaching impact or their contribution to improving the teaching of others. Nominees must be employed at the time of their nomination and, if not chosen, will remain in subsequent pools of nominees for three more years regardless of changes in their employment status. Below are the areas that will be evaluated. The chosen recipient will have documented excellence in several areas but need not have documented excellence in each area.

Recipients will have made significant and impactful contribution in several of the listed areas. Nomination requires:

The annual nomination deadline is October 1st.  Nominees who are not selected are automatically placed in the pool of nominees for the subsequent year for a period of three years.  Nomination packets will not need to be resubmitted, but any (brief) updates to materials are welcome.