The long shadow of colonial medicine

To what extent did French health campaigns from 70 years ago feed modern day mistrust in Central Africa? 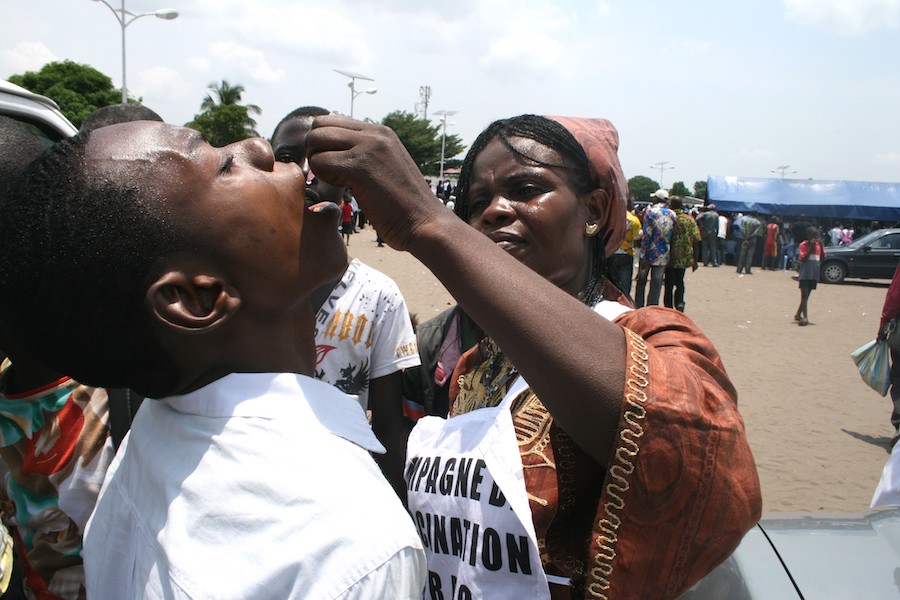 A woman in the Democratic Republic of Congo (DRC) administers a polio vaccine March 23, 2007

There’s a folk song that some people in Central Cameroon sing about a tragic period in their colonial history when sleeping sickness was ravaging their communities.

The ballad doesn’t lament the effects of the disease though. It’s about the hardships of enduring the sometimes brutal, French-led health campaigns that aimed to cure it.

“To me it really sums up what these experiences were like,” economist Sara Lowes said in an interview with the AEA. “Importantly, I think it demonstrates how even if people don't explicitly talk about these campaigns today, how knowledge of the campaigns could be transmitted across generations and a hesitancy of interacting with the medical sector could persist.”

In a paper in the American Economic Review, Lowes and coauthor Eduardo Montero examine the lasting effects from these French health campaigns carried out over 70 years ago. They say that being forcibly examined, sometimes at gunpoint, and injected with medications fed deep-seated mistrust in Western medicine that has been passed down through generations of sub-Saharan Africans. Their findings highlight the long shadow that colonialism continues to cast on the African continent and the unintended consequences of aid interventions.

Sub-Saharan Africa has a disproportionate percentage of the global disease burden. The region accounts for 90 percent of all malaria deaths, 70 percent of people living with HIV, and has some of the highest mortality rates in the world for infants and young children. The region is also far behind developed nations in COVID-19 vaccination rates. (See the chart below.)

Development officials have sought to alleviate these burdens through global health campaigns, but Lowes and Montero’s paper demonstrates that distrust in medicine remains a significant hurdle.

Between the 1920s and 1950s, French colonial governments undertook extensive medical campaigns in sub-Saharan Africa aimed at managing tropical diseases such as sleeping sickness, a lethal parasitic disease transmitted by the bite of a tsetse fly. Millions of individuals were subjected to medical examinations and forced to receive injections of medications, some with serious side effects including blindness, gangrene, and death.

Lowes and Montero digitized thirty years of archival French military records documenting these health campaigns in the Central African Republic, Chad, the Republic of Congo, and Gabon. They then examined demographic and health survey data on modern day campaigns to test whether regions more exposed to colonial medicine were less willing to consent to treatments today.

I think it demonstrates how even if people don't explicitly talk about these campaigns today, how knowledge of the campaigns could be transmitted across generations and a hesitancy of interacting with the medical sector could persist.

Specifically, they looked at the share of completed vaccinations for children under five, as well as blood tests for anemia and HIV. The authors found that exposure to the colonial medical campaign, which had an average length of 15 years, is associated with a 5.8 percentage point decrease in completed vaccines.

“A stark outcome here is that everybody in our datasets wasn't directly exposed to these campaigns,” Lowes said. “That means that there's an intergenerational component of mistrust that gets transmitted across generations.”

This suspicion does not extend outside medicine. Lowes and Montero used Afrobarometer survey data to examine trust in other people and institutions and found that individuals did not express more suspicion toward their neighbors, local leaders, police, or other non-medical institutions.

It’s unclear exactly how these cultural attitudes about health workers are passed down through generations, whether from direct conversations between parents and children, or through more subtle messaging.

Regardless, the paper holds important lessons for health campaigns today, at a time when many developing nations are struggling to vaccinate their populations amid the COVID-19 pandemic. It raises the question of how to rebuild trust in communities that have been exposed historically to abuse from the medical sector, and the importance of involving community members themselves in initiating these health campaigns.

“Who are the right people in local communities to get on board to increase people's willingness to participate in these campaigns?” Lowes said. “This suggests that you need a lot of support from local leaders and identifying those right people is probably really important.”

“The Legacy of Colonial Medicine in Central Africa” appears in the April 2021 issue of the American Economic Review.

Having more black physicians could lead to better health among black men.

A “dark side” to the commodity boom in Africa

New evidence on the resource curse