What has censorship done to the Chinese public’s demand for politically sensitive news?

In 2016, newspapers around the world marked the 50th anniversary of China’s Cultural Revolution. Inside the Middle Kingdom, authorities made sure coverage of the anniversary was almost zero, but there was a small group of undergraduates that read about it in the New York Times.

A couple of months before they probably wouldn’t have. They had recently been given an uncensored version of the internet, along with a little encouragement, by a pair of researchers from Peking University and Harvard University.

Economists Yuyu Chen and David Yang wanted to know what Chinese students would do if given access to the same internet as the rest of the world.

They reported in the June issue of The American Economic Review that it’s not as easy as some critics of censorship think to get people interested in new sources of information, but once they are, it can have a long-lasting effect on their attitudes and beliefs.

For years, we've believed that censorship is just a story about the supply of information. We have to carefully think about the demand for information too.

The term for China’s system of online censorship—The Great Firewall—makes the country sound like an impenetrable fortress. But, at least in 2015 when the researchers began their experiment, there were relatively cheap tools for bypassing restrictions. So-called “proxy services” could get around the censors, and users who took advantage of the technology were largely left alone.

The authors started their random experiment by giving students at two elite universities these tools for accessing the unrestricted internet, and by monitoring their browsing activity. They found that only half of the students actually used the circumvention tools, and those that did spent very little time browsing foreign news websites that had been blocked.

That finding didn’t come as a big surprise to the researchers. Growing up in China, Yang saw firsthand that years of censorship have created an alternative web, which many Chinese people feel suits their needs just fine.

“You have a generation of students in China who grew up having an internet that’s been blocked,” Yang said. “This could be quite a powerful force to foster this low demand [for foreign information].”

In short, how could someone find censored news that’s important to them if they don’t know what to look for in the first place?

To solve that problem, about a month into the experiment, the researchers gave the students a temporary financial incentive to visit foreign news sites—a few dollars for answering current-events questions correctly—plus the free access. And these students were immediately more likely to browse politically sensitive information.

But more importantly, they visited restricted news sites much more frequently than their peers even several months after the encouragement ended. For instance, they spent 9 minutes on average browsing the New York Times during the 50th anniversary of the Cultural Revolution, while students with access-only spent about 2 min on average.

All the uncensored news that's fit to print
The chart below shows the time that students spent browsing the New York Times during the 18 month experiment. The red line represents the students who got free Internet access and encouragement to read about current events. The blue line represents the students who only got free access. The dotted line (y-axis on the right-hand side) indicates the proportion of articles published on the New York Times that were politically sensitive during a week. 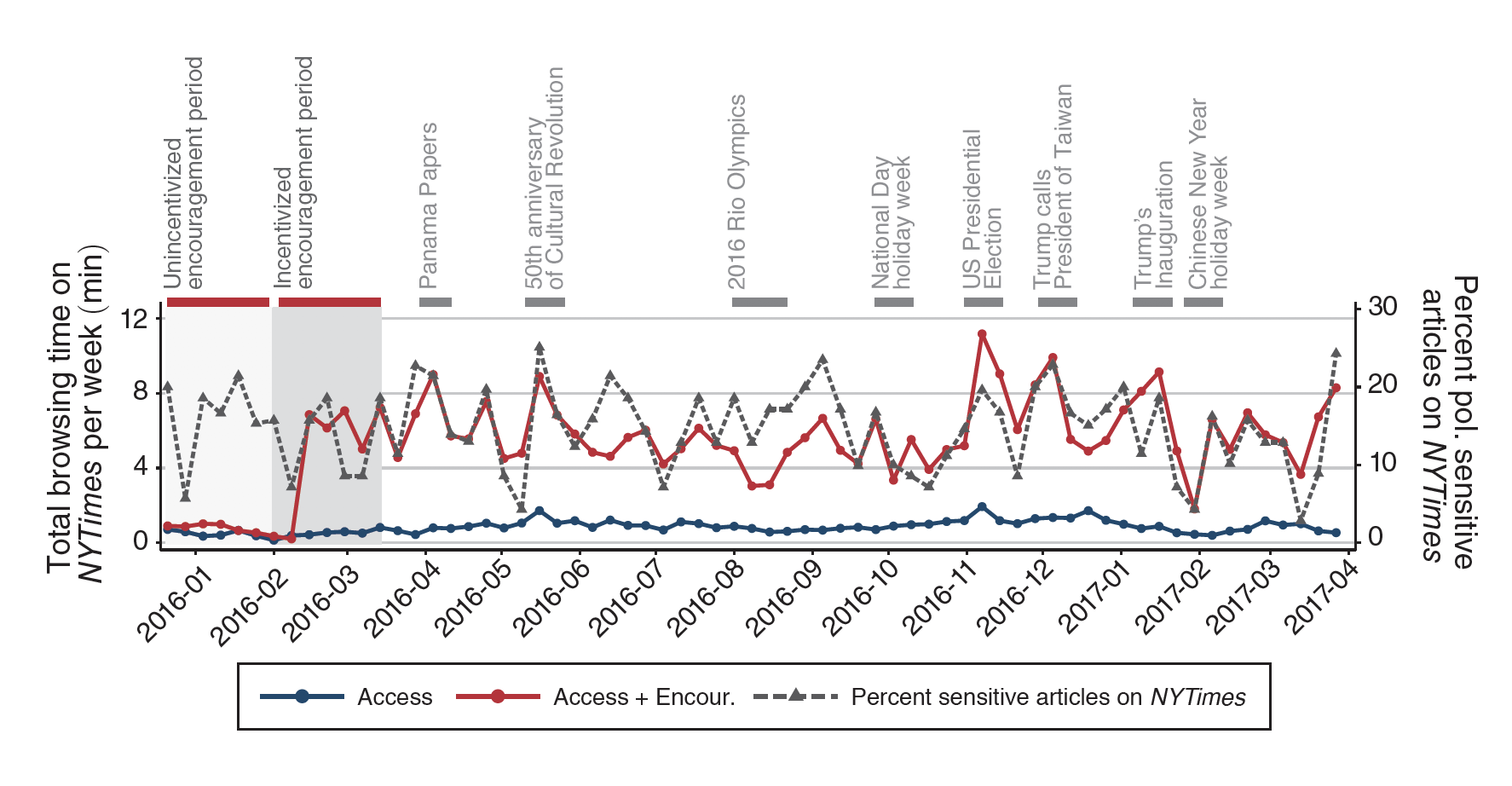 This exposure to foreign media left a lasting impression. On top of knowing more about current events, students were more pessimistic about the economy, more skeptical of the government, and more likely to plan on leaving China.

In the end, the study complicates the picture for advocates of free expression. If they want to reverse China’s tightening grip on the flow of information, the authors’ central finding should be kept in mind.

“For years, we've believed that censorship is just a story about the supply of information,” Yang said. “We have to carefully think about the demand for information too. We need to tell people where to look.”

“The Impact of Media Censorship: 1984 or Brave New World?” appears in the June issue of The American Economic Review.

No prosperity without freedom

Can China's media thrive while being a propaganda arm for the government?