How does switching to a different academic calendar impact students? 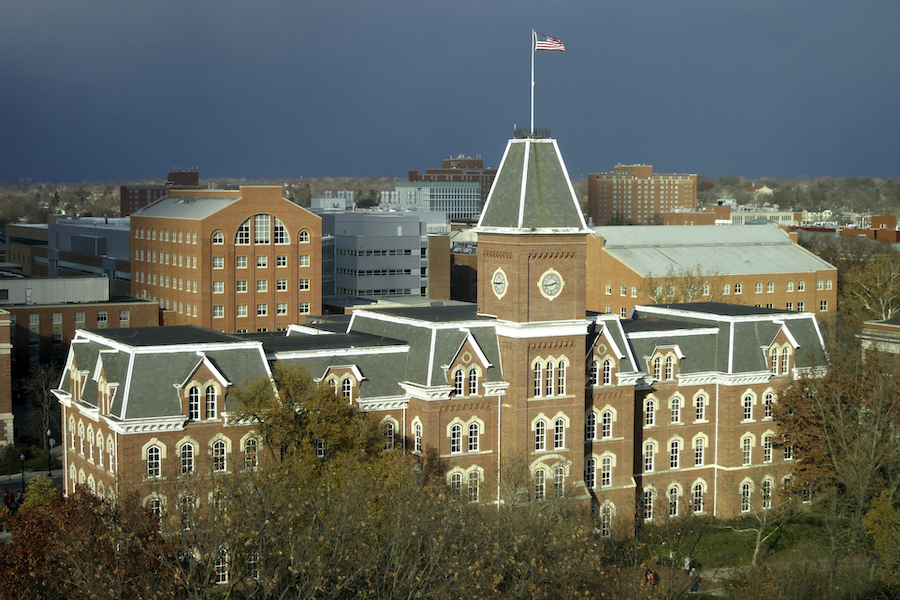 University Hall at The Ohio State University main campus in 2013, shortly after the school switched from quarters to semesters.

When The Ohio State University switched from a quarter-based academic calendar to semesters a decade ago, administrators reasoned that it would better align the university with most other schools, facilitating transfers and opening more job and research opportunities for students who would have been kept in school a month longer than students with a semester calendar.

Semesters are, indeed, the dominant academic calendar in the United States. But there is still some debate about whether the semester system is better for students. Defenders of the quarter system say that it provides more flexibility to explore disciplines and still graduate on time. Students often take three or four classes per quarter term, compared to four or five per semester.

In a paper in the American Economic Journal: Economic Policy, authors Valerie Bostwick, Stefanie Fischer, and Matthew Lang provide the first comprehensive analysis of how students are impacted when schools switch from quarters to semesters.

“There’s definitely this idea that one calendar is better (for students) than the other,” Fischer told the AEA in an interview. “That's what led us to investigate it.”

In 1891, the University of Chicago was the first to implement 10-week quarters, and while dozens of schools followed suit in the decades after that, the recent trend has been to move away from the quarter system. Since 1987, 132 colleges and universities have converted to semesters, leaving only around 5 percent on a quarter calendar.

These conversions come at a cost—Ohio State spent $12.6 million to modify technology, redesign courses, and realign its curriculum. But officials believe there are long-run payoffs from being aligned with most of their peers.

Switching to semesters
In 1991, about 87 percent of schools operated on a semester schedule. That increased to 95 percent by 2010. 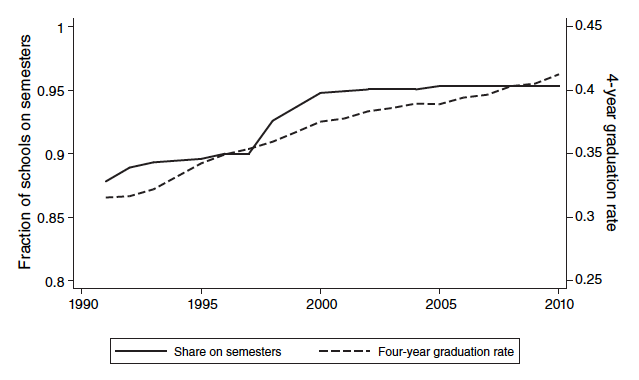 The authors analyzed data from institutions around the United States and then used variation in the timing of the adoption of semesters to identify causal effects.

They found that switching to semesters reduced on-time graduation rates by 3.7 percentage points, equivalent to a 10 percent decline at the mean for four-year graduation rates. Importantly, this was not a short-term impact. The effects persisted nine years out from the switch.

“What this suggests is that the negative effect is not due to this temporary chaos around a large administrative change, but that there is probably something about the calendar that leads to longer times to (obtaining a) degree,” Fischer said.

One benefit would have been if the change to semesters opened up more internship opportunities for students. But the authors found little evidence to support that hypothesis. Switching to semesters did not result in any meaningful gains to “internship-type” employment.

What this suggests is that the negative effect is not due to this temporary chaos around a large administrative change, but that there is probably something about the calendar that leads to longer times to (obtaining a) degree.

The authors speculate that moving to a semester system causes delays in graduation because it gives students less scheduling flexibility. Classes are offered less frequently and the school terms are longer. If a student changes majors or performs poorly in a class and wants to retake it, there are fewer opportunities to access the courses required for them to graduate on time.

Delaying graduation is expensive, potentially costing students tens of thousands of dollars more to achieve a degree, as well as lost earnings from additional time spent in classes rather than in the workforce.

This is not to suggest that schools should adopt a quarter system, Fischer said. The authors acknowledge that there are many potential effects of this policy choice that remain to be considered in future work. But administrators should understand the challenges that semesters pose to students and then provide the necessary support, such as expanding access to large gateway courses by offering them in both semesters and also during the summer so that students who switch majors don’t have to wait long periods of time before taking them.

“Semesters or Quarters? The Effect of the Academic Calendar on Postsecondary Student Outcomes” appears in the February 2022 issue of the American Economic Journal: Economic Policy.

Allen Sanderson and John Siegfried discuss why they believe the NCAA's current model is broken.

Do employers frown on for-profit colleges and online degrees?

Researchers submitted thousands of fictitious resumes to find out