The relationship between kinship networks and war. 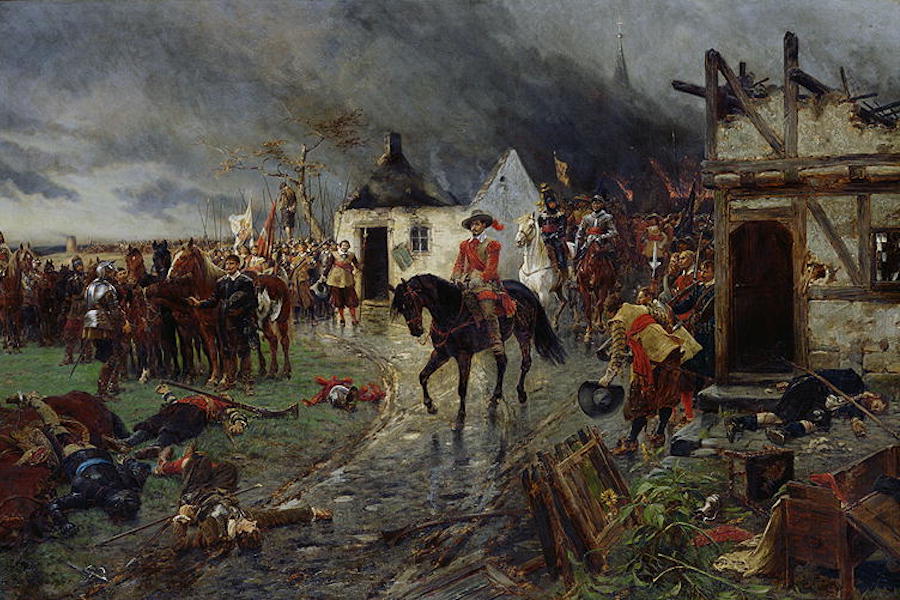 A Scene of the Thirty Years War, which occured between 1618-1648, provides an illuminating example of the relationship of kinship networks to conflict. In the preceding century, Lutheranism and Calvinism had spread across the Holy Roman Empire. A series of wars of religion rocked the continent. With religion so politically charged, inter-confessional royal marriages became very rare. An important tool for the deescalation of dynastic conflict was eliminated.

News media coverage of summits between world leaders often focuses on the interpersonal dynamics of the individuals involved in a way that can seem superficial and trivial compared to the larger national interests at stake.

Economist Seth Benzell thinks, however, that we shouldn’t be dismissive of how well world leaders get along.

“Sometimes you read in a newspaper that the president talks to the prime minister of England and they seem to really get along and talk to each other. Often we read that and we roll our eyes and say that that's court politics and not really interesting,” Benzell told the AEA in an interview. “But that stuff is actually important.”

In a paper in the American Economic Journal: Applied Economics, Benzell and coauthor Kevin Cooke explore how familial ties between European nations affected the likelihood of lasting peace. Their research focuses on royal kinship between 1495 and 1918, but Benzell believes there are modern day implications for how we study international affairs.

The key question Benzell and Cooke explore is whether ties between royal European families, particularly through marriage, actually secured peace between dynasties.

The paper’s inspiration came from the HBO series Game of Thrones, based on the bestselling fantasy book series by George R.R. Martin about nine noble families fighting for control of the fictional lands of Westeros.

However, it was actually the 16th century Dutch humanist philosopher Desiderius Erasmus who gave the authors their identification strategy.

Fighting with family
The figure below shows the inverse relationship between war and connectedness.  Hollow blue circles are the share of monarchy-pairs (dyads) ruled by monarchs with kinship ties by decade. Solid red circles are the share of years these country pairs were at war. The divergence of the best fit lines suggest that as connectedness increased, war declined. 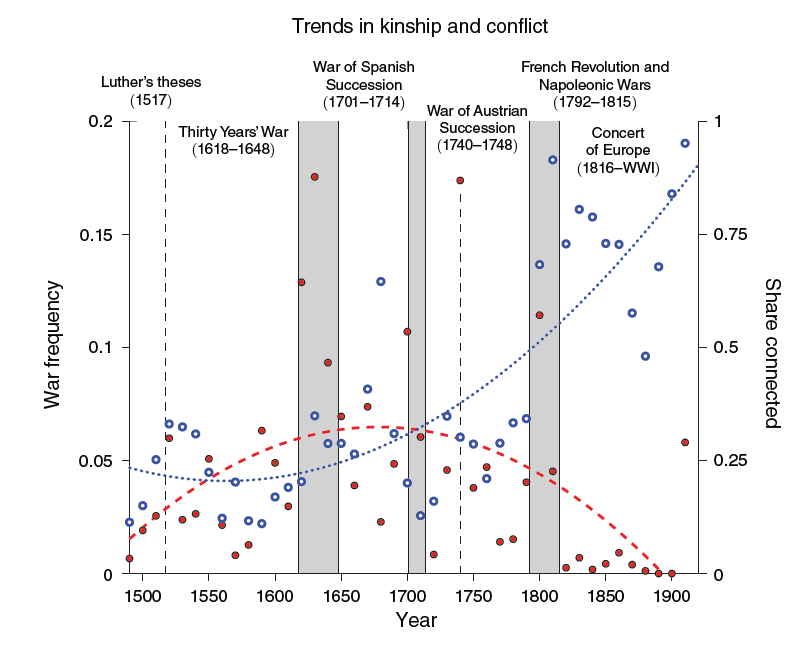 It was conventional wisdom during that time that royal dynasties could prevent wars by committing their offspring, or occasionally even themselves, to marry into a rival kingdom.But in his classic work, Education of a Christian Prince, Erasmus challenged the conventional wisdom, saying that “although marriages may secure peace, they certainly cannot make it perpetual; for as soon as one of the pair dies, the bond of accord is broken.”

This gave Benzell an idea about how to get around an essential problem—separating the exact effects of kinship ties from other factors that could influence the likelihood of going to war.

“The problem is that if marriage ties prevent wars, you might endogenously select your kids to marry people in other countries that you're either worried about having a war with or countries with which you want to form an alliance,” he said.

The authors found that if a pair of rulers became completely disconnected after having children who had married, the chance of war between those two countries in a given year increased by 9.5 percentage points.

According to the authors, their findings also partly explain why Europe became a much more peaceful place after the Napoleonic Wars ended in the early 19th century.

Sometimes you read in a newspaper that the president talks to the prime minister of England and they seem to really get along and talk to each other. Often we read that and we roll our eyes and say that that's court politics and not really interesting. But that stuff is actually important.

There was a 50 percent decline in war after 1800. The authors estimate that nearly half of that decline can be explained by growing kinship networks“The countries didn't want to fight each other because the rulers were related to each other,” Benzell said. “How do you win that war? It's going to be very awkward at the next wedding.”

But it’s unclear whether concern about the welfare of relatives was the most important reason that connected monarchs were less likely to fight wars. Family ties also functioned as diplomatic, social, and economic communication networks. Princesses in foreign courts could serve as hostages, representatives, or spies. And royal family connections may have served an indirect role by promoting cultural diffusion and trade, which made war less likely.

Although the authors' data does not extend beyond 1918, there are broad lessons that are relevant today. The main takeaway is that international relations are not always a cold, rational calculus of risk and reward. Personal relationships matter too.

“Anyone who says that the world is just a risk–reward and that there are obvious best strategies for every country, and then countries play those best strategies to the best of their ability …,” Benzell said. “It's only half the game.”

“A Network of Thrones: Kinship and Conflict in Europe, 1495-1918” appears in the July 2021 issue of the American Economic Journal: Applied Economics.

How much do extended family members impact the growth of human capital for future generations?

All in the family

Having central relations in a community can be critical for aspiring politicians.