Can civilian allegations of officer misconduct be used to prevent future incidents? 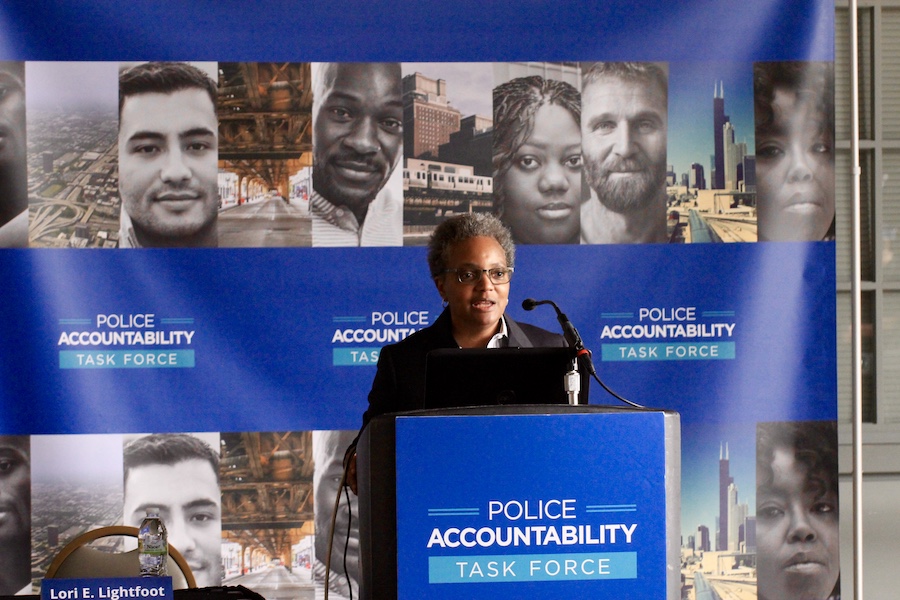 Lori Lightfoot, then president of the Chicago Police Board and Accountability Task Force Chair, discusses the findings of its report released in April 2016.

An important question following any violent death is whether it could have been prevented.

So it was with Laquan McDonald. The 17-year-old Chicago resident was gunned down in 2014 by police officer Jason Van Dyke, who had a history of complaints of using excessive force prior to McDonald’s death.

If Chicago police had taken those complaints more seriously and pulled Van Dyke from street duty, would McDonald still be alive? It’s impossible to know. But a paper in the May issue of the American Economic Journal: Economic Policy says civilian allegations of officer misconduct may be a useful tool in identifying and reining in the worst offenders on a police force.

“While these allegations and the allegation process are taken seriously, maybe they’re not taken seriously enough,” said Kyle Rozema, who co-authored the paper with Northwestern’s Max Schanzenbach, in an interview with the AEA.

Schanzenbach and Rozema, a fellow at the University of Chicago who soon will join Washington University as an associate professor, looked no further than their own city of Chicago to determine whether civilian complaints could be a reliable tool for supervisors and policymakers concerned with reining in officer misconduct.

Chicago police have been involved in a number of high profile incidents, including McDonald’s death, that have caused civil unrest and been costly to the city. Chicago has paid out an average of $50 million a year between 2009-2014 to settle lawsuits stemming from police officer misconduct.

The issue is not a burden shouldered by Chicago, alone. Cities from New York to Pittsburgh and Ferguson, Mo., have dealt with the fallout from incidents involving police violence.

This paper suggests that allegations of police misconduct could become a critical tool in identifying the “bad apples” who account for a disproportionate share of incidents.

Rozema and Schanzenbach collected personnel records on all Chicago police officers between 2002 and 2014, and examined newly released data on over 50,000 civilian allegations of police officer misconduct to see whether they could reliably predict whether an officer would later be involved in a legal settlement over their actions.

After controlling for factors that might bias the results—such as police officers who worked in high-crime areas—the authors found a strong relationship between misconduct allegations and future civil rights litigation. But it was concentrated among the worst officers.

Officers who ranked among the top-1 percent of civilian allegations against them generated almost five times the number of payouts and four times the total damages in civil rights lawsuits. For context, if Chicago had removed the worst-1 percent (120 in total) from regular civilian contact and replaced with average officers, the city would have saved over $6 million in payouts from 2009-2014.

Meanwhile, there wasn’t much differentiation among the rest. Officers below the 80-90 percentiles for allegations are little different than officers with none.

The results seemed to validate the idea that the problems in the department were largely driven by a few bad actors rather than the entire police force.

“A very important part of the story is the very worst of the worst,” Schanzenbach said. “It did confirm some of the conventional wisdom that a lot of people were making, the argument about the bad egg.”

Their paper also sheds light on a policy related to whether an allegation is actually investigated by the department. More than half of allegations against Chicago police officers were dismissed because the complainant refused to sign a sworn affidavit. The reasoning goes that if allegations can lead to severe penalties for the accused, then the allegor should be prepared to face legal repercussions if they are lying.

Still, allegations without a sworn affidavit are just as accurate at predicting future police misconduct. The findings raise concerns that the requirement, which may intimidate many complainants, is suppressing otherwise legitimate allegations that could be used to hold police accountable.

The authors stop short of drawing any definitive policy conclusions. Collective bargaining agreements and local laws will determine the extent to which these tools can be used.

But, at the very least, their findings suggest that police supervisors need to take all allegations against their officers more seriously. Not only could it save cities costly legal actions, it could save lives.

“Maybe if Van Dyke had been flagged and had a partner that night, things would have turned out differently,” Schanzenbach said. “That’s the thing that’s in the back of my mind.”

Fitting the punishment to the crime

How does the severity of a penalty influence jury decisions to convict?